Polly Coles used her book ‘The Politics of Washing’ as a basis for a talk about present day life in Venice.

One purpose of this day was to look at how a country house can be run in the 21st century. Professor Phillip Lindley of Leicester University and George Drye, the Executive Director of Lamport, discussed the running of Lamport Hall by a private trust. Martin Drury used the acquisition of Canons Ashby as an example of how the National Trust operates.  Thomas Greenaway, who made the pietra dura coat of arms on Richard III’s new tomb in Leicester Cathedral, gave a demonstration of his highly skilled work.

Sandy Nairne spoke at Lamport Hall about art theft in general and the theft of two Turners in particular. He gave an account of how his efforts to help retrieve them involved dramatic contact with the underworld.  He then went on to discuss the ethical considerations that may arise in recovering stolen works of art.

Hew Strachan looked at various aspects of the First World War and, in particular, he discussed the different ways it has been commemorated since 1918 and how it might be remembered in the future.

In January 2015 we heard Peter Taylor talk about past and present terrorist threats. Having covered the troubles in Northern Ireland for the BBC, he is now a freelance journalist, documentary-maker and author and has turned his attention to the acute problem of Islamist extremism.  Peter described how the John Major government began the slow process of ‘talking to terrorists’ – the IRA – and what hopes there may or may not be for talking to present-day terrorists.

The history of the magnificent Hôtel de Charost, the British Ambassador’s residence in Paris, was described in a talk by Tim Knox.  It has witnessed the turning tides of European history, having been owned by Napoleon Bonaparte’s notorious sister and then by the Duke of Wellington after his triumph over the Emperor.  Mr. and Mrs. Robert Brudenell kindly let us hold the talk at Deene Park and the evening started with Charlotte Brudenell giving us a brief introduction to the history of the house.

Giles Waterfield, art historian and author, talked about his grandparents’ gentle way of life among ex-patriate society in the South of France before the First World War changed their world forever. He described Clos du Peyronnet, the fine house and gardens they created in Menton and how he had used their lives as the basis for his haunting and nostalgic novel, The Long Afternoon.

The author, Caroline Sandon, kindly took us round the grounds of Burnt Norton, a Jacobean Cotswold manor house.  In September 1934, T.S. Eliot came upon the deserted Burnt Norton which inspired him to write the first of his ‘Four Quartets’.  Caroline has recently written a novel, also called ‘Burnt Norton’, which incorporates the bizarre history of the place. 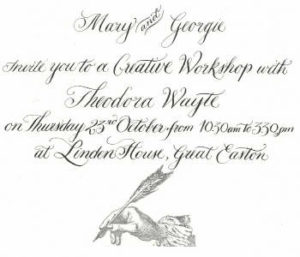 We limited numbers to only a dozen for a day with an artist who is impossible easily to define. We advertised Theodora Wayte as being ‘an artistic polymath’ with her talents ranging from watercolours to beautiful copperplate lettering.  She introduced us to her art and took us through some of her techniques for achieving unique results.

A private tour of Ditchley Park enabled us to study its fine eighteenth-century architecture and parkland surrounded by the rolling Oxfordshire countryside.

Elizabeth 1 famously visited Ditchley but the existing house is best known as the home of Ronald and Nancy Tree who frequently entertained Winston Churchill and members of the War Cabinet during the Second World War. Since the early 1960s the Ditchley Foundation has existed to foster Anglo-American relations.

We visited two contrasting Warwickshire houses: the Elizabethan Arbury Hall, which was transformed in the second half of the 18th century by Sir Roger Newdigate into a remarkable example of early Gothic revival architecture.

The second half of our day was spent at Maxstoke Castle, an example of a 14th century moated and fortified manor house.  This was by kind permission of the Fetherston-Dilke family in whose ownership Maxstoke has remained for 400 years.

We held three days of workshops, run by Col. Tony Singer, designed to increase everyone’s ability to get the most from their iPads and iPhones. He covered an  enormous amount of ground which instilled a new confidence to experiment with these clever devices.

Lucy Hughes-Hallett gave a talk on her book, The Pike, Gabriele D’Annunzio, which has been one of BBC Radio 4’s book of the week.  It is a biography in which an appetite for sex and beautiful things is juxtaposed with warfare and deadly politics.

There is a delightful postscript to Lucy’s talk. Exactly a week afterwards, it was announced that Lucy was the winner of the Samuel Johnson Prize for Non-Fiction 2013 for her book, The Pike.   Shortly afterwards it also won the Costa Biography Award and the Pol Roger Duff Cooper Prize which celebrates the best in non-fiction writing.

Catherine Bailey gave a talk about her best selling book Black Diamonds, the story of the Fitzwilliam family of Wentworth Woodhouse, who made their fortune from coal.  Catherine also talked about her latest book Secret Rooms, which explains the mysterious death of the 9th Duke of Rutland in 1940.  He died in a murky room next to the servants’ quarters at his family home, Belvoir Castle, a dark history kept hidden for over 60 years.

The Reverend Richard Coles, musician, journalist and Church of England priest gave a talk entitled ‘Servant of two Masters?  Trying to be a Christian in the Church and in the Media’.

Richard is parish priest of St. Mary the Virigin, Finedon and presenter of the Radio 4 programme Saturday Live.  In the 1980’s he partnered Jimmy Sommerville in the band The Communards, which achieved three top ten hits, including the No. 1 record and best selling single of 1986 ‘Don’t leave me this way’.

Anne Chambers, together with her husband Johnny, gave us an inspiring tour of Kiftsgate, the world-renowned garden, spectacularly set on the edge of the Cotswold escarpment.  The garden is famed for its eponymous rose.  It is the work of three generations of women gardeners.  The garden was created by Heather Muir in the 1920’s, continued by her daughter, Diana Binny, in the 1950’s and is now looked after by her granddaughter, Anne Chambers. 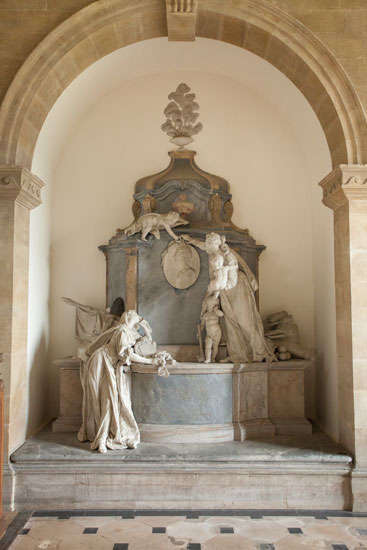 Dr. Phillip Lindley, Reader in Art History at Leicester University, showed us the extraordinary beauty of the Buccleuch monuments in Warkton church and revealed the unusual history behind the church’s architecture.  Afterwards, we went to Boughton House where Dr. Lindley described the development and huge scale of the 18th century gardens which now lie ‘fossilised’ under the grass. 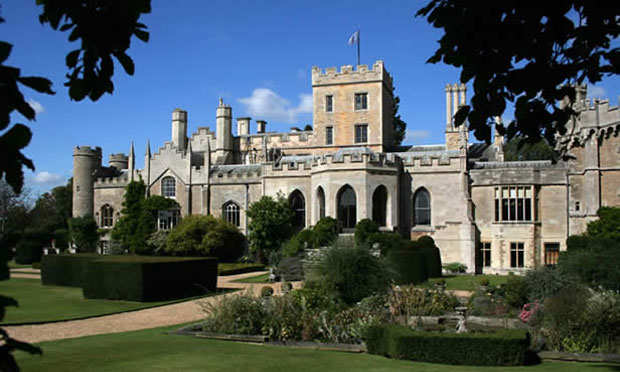 Lady Proby showed us over Elton Hall.  The present building dates back to the 15th century and contains many treasures, including fine paintings, china and furniture.  Its library of around 12,000 books is one of the finest private collections in the country and contains some particularly precious Prayer Books and Bibles some of which were on display in an exhibition illustrating the history of the Bible from Wycliffe’s 14th-century translation to the glory of the King James Bible in 1611.

We visited Stanway House, a glorious example of a Jacobean manor house.  It retains much of the fascinating furniture made specifically for the house.  The crowning glory of Stanway are the baroque water gardens.  The most spectacular feature is the single jet fountain, the tallest in Britain, which also has the distinction of being the tallest gravity driven fountain in the world.

We took a group to Aynhoe Park, a neo-Palladian house which has had the unusual good fortune to have been converted back into a private house by James Perkins having been, for many years, divided up into retirement flats.  The house makes a splendid backdrop for his unique collection of sculpture, both old and modern, as well as collections of antique taxidermy and plaster casts.  The 250-acre park was designed by Capability Brown.